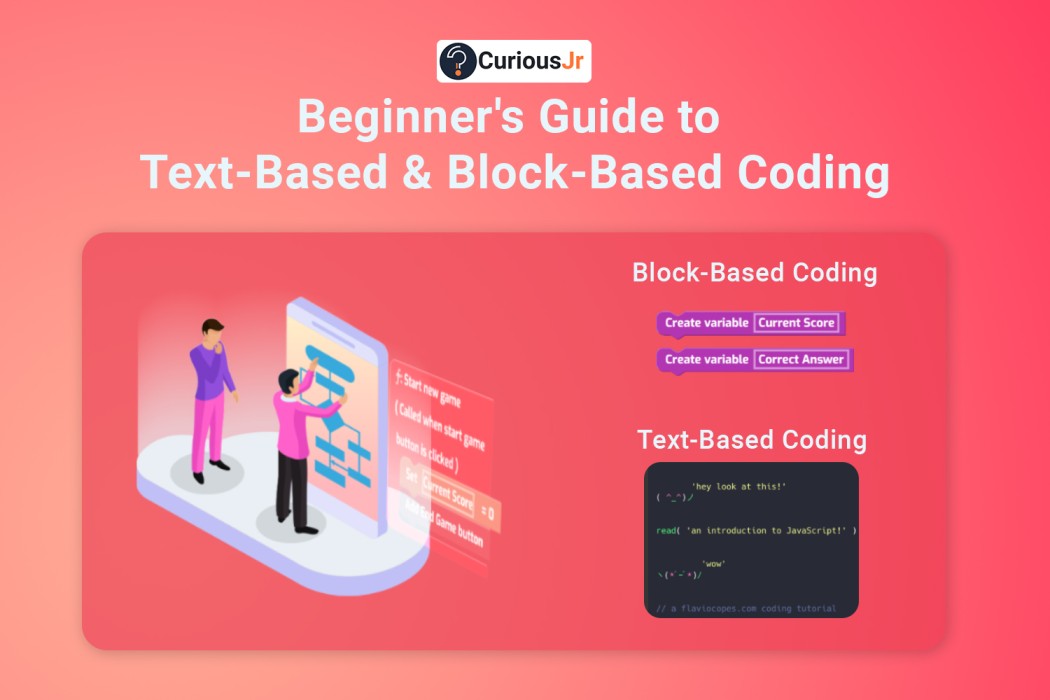 In this blog we will be discussing about the following:-

Apart from the fact that it looks good on your resume, there are a lot of other applications and advantages to knowing how to code. Coding helps kids to know how things work. It helps kids to think about everything logically. Yes, it is true that it isn’t easy to learn for a beginner. But, as a matter of fact, what is easy to learn. To learn anything you need to put in your effort and time. You have to dedicate yourself to that particular subject and invest in yourself so as to develop and excel in that subject. Similarly, learning, understanding, and applying code will take time. But, once you understand to do so you will have a different perspective towards everything. Meaning, that you are being a problem-solver. When given a problem you will think of its solution from many different perspectives. Even if you have a solution to that problem you will think about its practicality and viability. Which helps you in different scenarios of your life.

Now, comes the good part, how to start to learn to code. For starters, we have BLOCK-BASED Coding & TEXT-BASED Coding.

What Is Block-Based Coding?

Think it in this manner, how did you clearly understand that earth was round-shaped. It may be by seeing a globe or by seeing the images of it. That means visualization. Similarly, as the name suggests block-based coding means everything, in this case, is in the form of blocks. It is the easiest way to start learning and understanding code. Everything here is in a drag-and-drop environment. The idea of this is to create a code that is visual. This activity actually helps beginners to learn and understand code much easier. Also, it helps them to develop computational thinking. Moreover, it is a very fun way to learn code. With block-based coding also helps to develop kids’ imagination skills. It helps to turn their wild imaginations into animations.

Block-Based Coding has a set of predefined commands and instructions which makes it much easier for beginners.

As I mentioned earlier syntax refers to a set of rules to be maintained while programming. We all know that when there are rules, it implies that there are limitations and restrictions. When we think about it when there are rules we are restricted to use our full potential and bring out the best. But, in Block-Based coding, there is no syntax, which means that you can use your complete potential and bring out your wild and phenomenal imagination into animations as this is a complete drag and drop environment which is very hassle-free.

Talking about visualization, let me give you a simple example, simply read the following phrase. Imagine you are in a garden which has a very beautiful water fountain in the middle. There is also an elephant in the garden. The color of the elephant is blue. I am pretty much very sure that you visualized the color of the elephant only after I mentioned the color. This is just a very simple and small example of visualization. Many of us are people who visualize a lot. That means understanding and conceiving things by visualizing them. Similarly, there are programmers and developers who visualize their problems to find an apt solution for them. Visualizing our work helps us to bring out the best possible output. This is why Visual Programming is very effective.

There are different types of block-based programming languages. Let us have a brief understanding of what they are.

What is text-based Coding?

Text-based Coding simply means writing raw codes line-by-line. Text-Based Coding actually refers to programming languages that have different purposes and different applications. Programming languages such as Python, Java, C, C++, Javascript, etc. Also, in text-based programming, coding is done by typing various characters by following the syntaxes through the keyboard. Unlike block-based coding text-based coding has its respective syntaxes. After a point of time, all programmers have to convert to text-based coding if they want to develop and grow in this particular field. Because you can’t do all tasks using block-based coding as it has its limitations. Yes, it is difficult to learn and understand if you are entering the coding world directly through text-based but it won’t be as difficult when you start your coding journey through block-based coding. Each programming language has its own syntaxes, commands, and applications. It is totally up to you to learn which programming language according to your requirements. For instance, if you are interested in AI and ML then you should learn Python and its Libraries to go on, similarly, for all languages. Nobody suggests you to learn all the languages but it might be useful if have knowledge of all languages. But as a matter of fact, multi-tasking doesn’t work most of the time. There we suggest that you focus on one single language learn and practice that language thoroughly. Because it helps you to have a good grip on that particular language and helps you explore the opportunities in that language and grow.
Also focusing on one language helps you remember the syntax and commands in that language because you are using that language frequently in a particular environment.

Moreover, text-based coding is faster than block-based coding. By learning to code kids start becoming wonderful creators. Learning to code helps them to have infinite opportunities in their future and also, something which is very trending nowadays, it’s going to look good on your resume, but as a matter of fact, it is a very lame reason because there is no point in bragging about having an iPhone if you don’t know how to use it similar case goes for this.

Different Programming Languages In Text-Based Coding And Its Applications

Let us understand a little bit about some of the different types of programming languages of text-based coding and some of their applications.

Now, you might have a question that “where to start and with what should I start??”. Well, the answer totally depends on you. If you are a person who has been practicing block-based coding for a while we suggest you start with text-based coding which will offer much more opportunities to grow. But, if you are a person who is completely new to the coding field then you better start with block-based coding which is one of the best options for kick starters and also one of the most fun,hassle-free and easy ways to learn code. And if you are into starting with text-based coding then also it’s completely fine and normal. While learning text-based coding you should have the patience, time, and determination to learn and understand its syntax, commands, and learning to code. Yes, it is a time-consuming process. Also, whether it be text-based or block-based only practicing it consistently allows you to master it. Also, remember the fact that Multitasking doesn’t work, it is like being Jack of all trades and master of NONE. Therefore only focus on one method, complete it and then move forward to the next. Remember the fact that whatever you learn will never be a waste of time because at one point of your it will surely become handy to you. Therefore learning to know to code could actually be a skill that could become at the least a side hustle for you and if it is your mainstream it could become somewhat everything for you. Also, it is slower to code in block-based language when compared to text-based languages because, in text-based, users can input commands and required instructions directly through the keyboard. Even though block-based is a good starting point for kids to start their coding journey and create wonderful things without worrying about any syntax, it doesn’t provide a complete introduction to coding, because some coding skills such as commenting, troubleshooting, debugging, and code styling cannot be taught through block-based coding.But apart from all the mentioned drawbacks of Block-Based Coding, considering the big picture we suggest that block-based coding is the best way for your kid to begin their coding journey as a beginner. Also, to start learning to code you don’t need to have a big hardware setup or a costly laptop. Believe it or not, it is now possible through your fingertips from your very own phones. Yes, you don’t need to have a laptop to start your coding journey, your mobile phones are enough. In order to do so, Curious Jr. provides the opportunity for that. To start your journey connect with us.