Can We Learn Coding In Hindi? 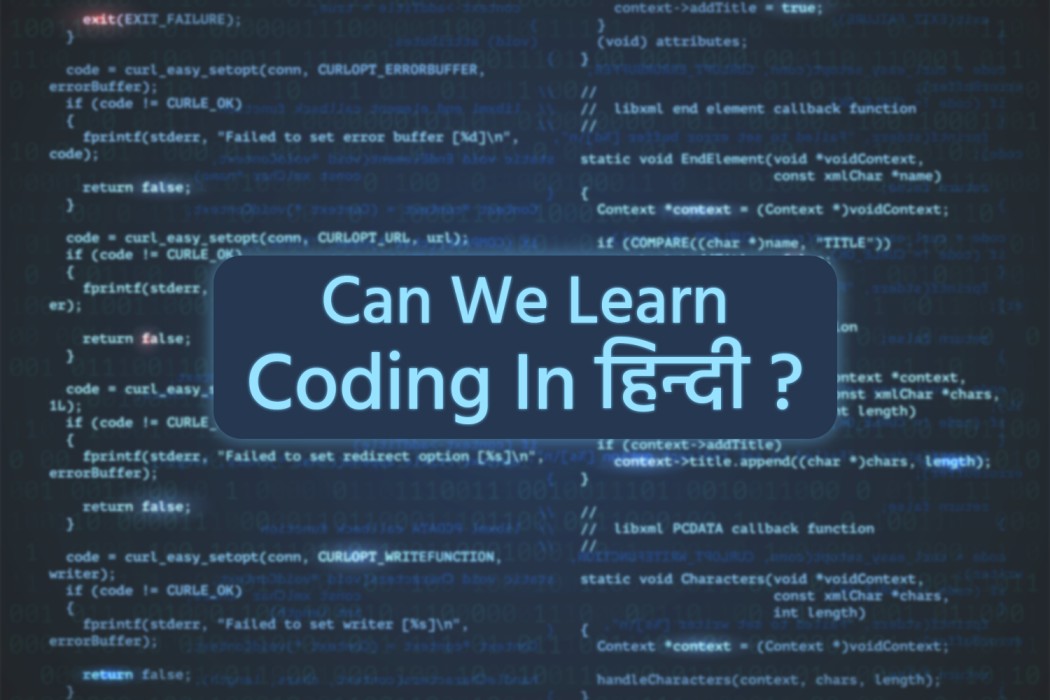 In this blog, we will go through the following.

There are 50-75 million marginalized youngsters worldwide who are not enrolled in school. Children whose native language does not correspond to the language of instruction in school are more likely to drop out or fail in the early grades. According to research, children's first language is the best language for literacy and learning throughout primary school (UNESCO, 2008a). Despite mounting evidence and parental pressure, many educational systems across the world insist on the exclusive use of one or more favored languages.

It's not difficult to see what's at stake: parents not enrolling their children in school at all, children who are unable to engage successfully in learning activities, instructors who are overwhelmed by their students' incapacity to participate, early experiences of school failure, and so on. Since 1953, UNESCO has encouraged mother tongue instruction in primary education (UNESCO, 1953), and UNESCO emphasizes the benefits of mother tongue education from the start: children are more likely to enroll and succeed in school; parents are more likely to communicate with teachers and participate in their children's learning; girls and rural children with less exposure to a dominant language stay in school longer and repeat grades less frequently; children in disadvantaged communities are more likely to enroll and succeed in school.

Some educators say that only nations where the student's first language is the language of teaching are likely to meet the Education for All goals. According to research, including underprivileged children in school via mother-tongue-based, multilingual education (MTB-MLE) is an effective paradigm.

How does learning in the local or regional language help?

The Union Cabinet approved the National Education Policy (NEP) on July 29, 2020, which states that the medium of instruction in schools through Grade V – preferable until Grade VIII – should be the local or regional language wherever practicable. "All efforts will be taken early on to guarantee that any gaps that occur between the child's language spoken and the medium of instruction are addressed," the NEP reads.

Using the child's native language in the early school years promotes attendance, academic results, and the capacity to acquire new languages. Studies from throughout the world also suggest that it promotes classroom involvement, lowers dropout rates, and minimizes grade repetition. Nonetheless, according to a 2016 study from the Education Commission, a worldwide campaign for inclusive and quality education, half of all students in poor and middle-income nations are not taught in a language they know.

According to experts, English education is not always the best option. "You can learn to read and write in the language you know best." If you are taught in a language you do not understand, comprehension does not occur, resulting in rote memorization and copying," explained Dhir Jhingran, a former Indian Administrative Services officer and the founder of the Language and Learning Foundation, an organization that works with state governments in Rajasthan, Chhattisgarh, and Haryana to prepare study material in the local language and train teachers to use it. "Good learning occurs when children have good self-esteem, are well-adjusted, and are in a classroom that fosters a positive and fearless atmosphere." None of this will happen if the child is educated in a language they do not understand," Jhingran continued.

Is Coding only for those who speak English?

More than one-third of programming languages were created in English-speaking nations. However, several of the most well-known and widely used coding languages were established in nations other than the United States, such as Switzerland (PASCAL), Denmark (PHP), Japan (Ruby), Brazil (Lua), and the Netherlands (Python).

The computer language LSE (Langage Symbolique d'Enseignement - Symbolic Language for Teaching) was created by the French and was based on French keywords. That programming language finally faded out due to a lack of French understanding. The decision to adopt English for PASCAL was made in response to the failure of LSE.

"This does not even take into consideration languages produced in non-English speaking nations and translated into English in order to appeal to a global audience. PASCAL, which was created in Switzerland, was the primary language used to create the original Macintosh computers. Niklaus Wirth, the Swiss computer scientist who created PASCAL, could have written in any of Switzerland's four official languages. Why did he select English?

At the same time as PASCAL was being created in the early 1970s, the French Ministry of Education controlled the design and dissemination of LSE, Langage symbolique d'enseignement — Symbolic Language for Teaching, which was based on French dialect and included French key words. It perished swiftly in the 1980s and was sarcastically dubbed Langage Sans Espoir — Language Without Hope.

So, this just goes to tell us that not only were these languages not created only in English but maybe they should not be perceived as those which can be learned only by English-speaking individuals. In India especially, where it is common practice for primary education to have a Hindi language mode of instruction, Coding should definitely be taught in Hindi to cater to those who have a faster rate of grasping Hindi. We will now look at why Hindi is the logical choice of language of instruction after English.

Coding in Hindi? Why?

Coding in Hindi: How

A variety of platforms have started offering tutorials, lessons, and doubt sessions in Hindi to cater to India’s vast Hindi-speaking audience. As coding is a language in itself, it is already a task on its own to begin from the basics to eventually be able to use it so that you can code to change the world. When the medium of delivery of training and education becomes more comfortable for students, they learn faster, ask more freely and thus develop into better professionals.

Platforms such as CuriousJr offer highly interactive and fun-filled gamified coding experiences along with Hindi content and doubt clearing sessions to make it easy for students to grasp important coding concepts at the right age. Being able to easily understand the coding lingo and what it does is explained in Hindi will also make students stronger in their concepts and motivate them to experiment with code. Experimental and Creative mindsets in coders are the things that are going to help these budding minds shape our future and confidence is key in both. Learning coding in their primary language will give them this very confidence.

As school-going kids are already burdened with a vast curriculum consisting of everything from math, science, languages, to physical activity and music. All of this is exacerbated by the use of English as the medium of teaching — it's a developmental nightmare. For the first time in their life, kids must manage for long periods of time in an unfamiliar setting with a big number of other children they do not know. They must sit motionlessly, be silent, and only talk when ordered to do so. The instructor, who is also a stranger, wants the children to learn totally new concepts such as reading and writing, addition and subtraction, photosynthesis, and the distinction between a city, state, and nation.

To be able to look at coding as a favorite pass-time activity and not just one more addition to their burden it is very important that they are more comfortable with the medium in which information and instructions are conveyed to them. This further reiterates the importance of having platforms where one can learn coding in Hindi. The language of education should simply be a vehicle, an easy flow of syntax and words that everyone can absorb without having to sift through it for meaning and definition. Science, arithmetic, and literacy are difficult enough without adding layers of complication. The country needs its next generation of leaders to properly understand its foundations so that they can practice medicine, build bridges, install plumbing, and design solar lighting systems. In addition, children can acquire a second, third, and fourth language all at the same time.

So having instructions and tutorials for coding in Hindi means not only that it will have a large audience but also that it will open up opportunities for coding platforms in Hindi. Though there are platforms that have set out to provide educational coding resources, there is tremendous scope for growth in the development and innovation of these processes.

Given that coding boosts many traits and shapes the personality of individuals in the following ways:

It is clear from the list above that coding is not to be restricted or denied to anyone due to any barriers be it financial or linguistic. Coding is beneficial to practically everyone, particularly those in the computer industry. According to one poll, the average monthly salary for developers with 6+ years of experience is £45,387, placing UK devs among the highest paid in Europe. With technological breakthroughs and an expanding number of coding professions available, it's natural that you're unsure which route is ideal for you. e-Careers looks into the numerous options.

Teaching youngsters to code provides them with valuable skills that they may apply in their schooling and subsequently in their jobs. Coding is a fantastic ability that has no demographic limitations, from improving academic achievement to providing your youngster with a creative outlet. Anyone, beginning with youngsters in grades K-12, may learn the skills required to become a good programmer. Many of our day-to-day interactions in the twenty-first century necessitate the use of code. Coding has a significant impact on everyday living, from your smartphone and calendar getting clogged with continual Zoom talks to making an Amazon purchase. The devices and programs we use are professionally built by skilled software developers, a field that is anticipated to grow by 22% by 2029.

Looking at the several positives of learning how to code, and how coding is going to be a non-negotiable skill for careers of the future, it has become clear that more platforms for Hindi interaction in terms of both teaching and learning need to be developed. The scope of Hindi as a language and the size of the market that can be affected by this kind of development are too high. Several platforms, including those such as Curiousjr, have already started releasing lectures and educational content in Hindi. How long before the others join the Race?

Download CuriousJr for more updates on Coding for Kids.Happy coding!