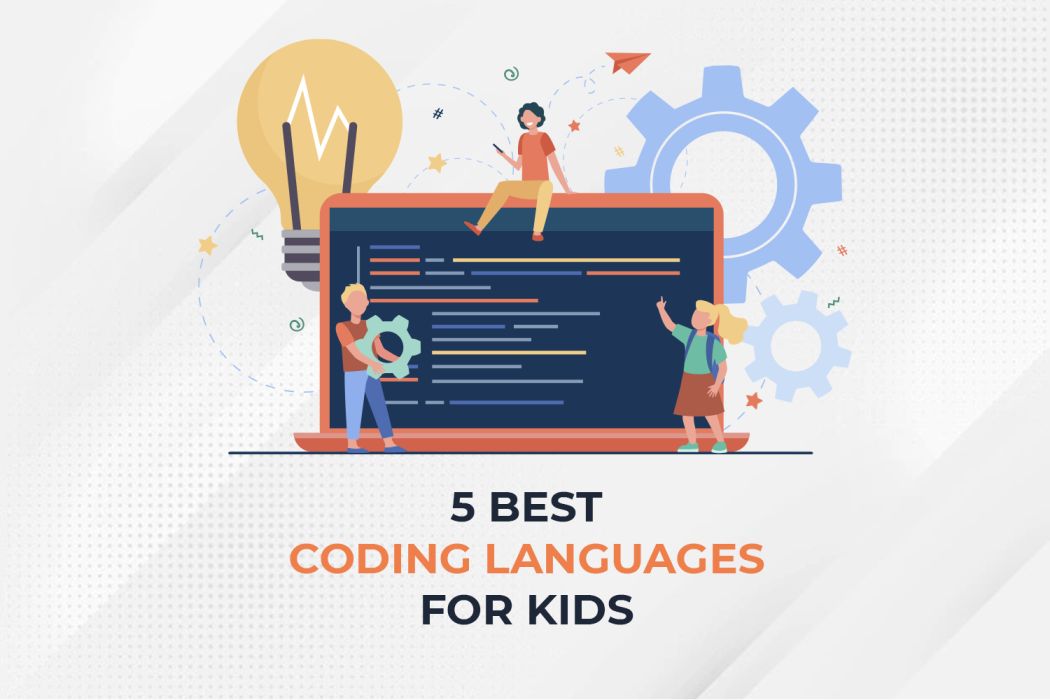 In this blog, we will learn more about the following:

The building blocks of modern civilization and its everyday needs are software programs. Teaching youngsters how to use, interact with, and perhaps change it properly is a highly valuable future professional skill. But not all coding languages are created equal be its simplicity of coding or application, despite the fact that most of them may provide identical results. The difficult ones may discourage children from ever learning to code if they aren't nice, humorous, or interesting. This is why children's coding languages are so vital and should be carefully investigated and chosen. They reduce the complexity and inconveniences of traditional programming to allow youngsters (and beginners) to become acquainted with core coding principles and concepts.

This is why children's coding languages are so vital and should be carefully investigated and chosen. They reduce the complexity and inconveniences of traditional programming to allow youngsters (and beginners) to become acquainted with core coding principles and concepts.

Computer coding for kids should not be regarded as an extracurricular or a hobby, especially by parents dedicated to making their children career-ready. It should be required of students of all ages and levels for a variety of developmental reasons. Coding is the talent of the future, according to current patterns, trends, and technical breakthroughs. Computer programming, like computer literacy, will become a need for a variety of skills and occupations, even those unrelated to computer science or IT concentration in Engineering.

Let's have a look at several programming languages that make the development process more enjoyable and engaging:

Scratch is a free coding language that may be learned online if you have a group of kids who want to make animations, interactive tales, art, or music. While this single language is basic enough for toddlers, it has enough features and options for even the most experienced programmers to utilize. Scratch also has a flourishing online community where people can share their ideas, which may excite your children's interest even more. Scratch is a free, educational programming language patented by MIT and developed by Mitch Resnick.

It was largely focused on youngsters aged 8 to 16. (MIT). It is perhaps one of the most well-known block-based programming languages oriented for children and beginning coders due to its simple and highly visual interface. Scratch is a platform that teaches youngsters how to make art, animations, games, interactive storytelling, and other interactive media. They do it in a straightforward manner, decreasing frustrations while encouraging involvement. Scratch, a visual programming language, was created in 2007 by the MIT Media Lab. Because of its colorful blocks and drag-and-drop interface, it is one of the easiest programming languages to learn.

Scratch, unlike traditional programming languages such as Python, which requires the programmer to write code, allows both children and adults to develop interactive games and programs by linking code blocks. Scratch is suitable for youngsters above the age of eight. ScratchJr is a good alternate choice for youngsters aged 5-7, with a simpler and more straightforward platform than traditional Scratch. Scratch is designed for youngsters ages 8 to 11, although older children and adults may use it as well. Scratch is a simple and quick introduction to coding for anyone who has no prior experience in computer science.

To assist youngsters understand coding principles, Blockly likewise employs lines of code chunked into blocks and a drag-and-drop interface. This, like Scratch, reduces the chance of technical mistakes and lets children concentrate on the essentials. To keep youngsters interested and engaged, Blockly also employs a colorful, smart, and user-friendly interface. The most significant distinction between the two systems is that Blockly, as a visual, block-based programming language for children, is really composed of multiple pre-existing coding languages.

The UI of Blockly is very bright, and the code blocks they utilize are all various forms. This makes it easier for kids to discover, choose, and identify the correct blocks. The primary scriptwriting platform is divided into two sections: a toolbox containing the necessary components and a blank space for dragging and dropping the blocks on (i.e., write code). Simply choose the desired block, drag it from the toolbox, and drop it onto the vacant spot (one at a time). They may rearrange the blocks once they are on the space to form sequences, loops, conditionals, and so on. Blockly does a check-up on the completed program (similar to running textual code through a debugging process). If the solution is incorrect or the program fails to execute properly, Blockly analyses the code again until it detects the issue and highlights it for the user to find and rectify. This highly visible, clean-cut code style allows anybody to create a fully functional Android app. That's correct, Blockly can be used to create genuine apps. So, while Blockly was designed primarily as a coding language for children, the language's characteristics make it far more than simply a basic teaching tool for youngsters.

Lua is a relatively lightweight, easy-to-use coding language created in Brazil for use in apps. It's one of the multi-level languages, which implies it has a set of general properties that may be used to a wide range of problems. This, however, has no influence on its use as a piece of software or a coding platform. Despite its simple interface, Lua is one of the most powerful free programming languages available on the internet. Because the number of developers who use Lua is expanding all the time, students may master this technology that will aid them in a variety of vocations.

This programming language is often compared to Python as they are both simplified text-based scripts designed to reduce grammar problems that can make coding tough for children. There is no need to insert semicolons at the end of each line of code, for example. Because of its efficiency and portability, Lua is suitable for designing embedded devices and mobile apps. Lua has a huge and active community as well (just like Scratch). It's comfortable for other coders, learners, and experienced developers ready to provide help, suggestions, and comments to the younger and newer members.

It's a fantastic alternative for jobs like learning how to make a game because of its short learning curve (similar to Python), ease of embedding, and quick execution. Lua was the most used language when it came to the development of games, according to the platform- GameDev.net, and it won the Gamasutra Frontline award to be named the best programming tool. Lua is a powerful, lightweight, and embeddable scripting language that supports a wide range of programming paradigms, including procedural, object-oriented, functional, and data-driven programming.

Unlike other languages such as Python, Lua is not instantly interpreted when a Lua file is opened. Instead, it uses something called the Lua interpreter to compile a Lua file to the traditional bytecode. Because the interpreter of Lua is written in ANSI C, it is portable and can run on a variety of devices. The compilation is frequently done during runtime. However, it is sometimes possible to conduct it before the runtime to improve load times. The virtual machine of Lua will then execute the generated bytecode. The Lua virtual machine's register-based design closely resembles actual hardware designs, which will increase overall program performance.

Alice is a free, block-based visual programming language for children created by Carnegie Mellon University. It's a cutting-edge coding environment that makes it very simple to create 3D animations, interactive narratives, and basic games. Alice is intended to teach the fundamentals of object-oriented programming languages (such as C++) through creative inquiry, with a secondary emphasis on logical and computational thinking abilities, essential programming principles, and an overall core grasp of coding.

Unlike many puzzle-based coding apps, Alice encourages learning through creative inquiry. Alice is intended to educate logical as well as computational thinking abilities, fundamental programming ideas, and to provide a first introduction to the concept of object-oriented programming. The Alice Project provides extra tools and materials for teaching using Alice across a range of ages and subject matter, with shown benefits in engaging and retaining diverse and marginalized populations in computer science education.

Programs written on Alice's platform may be transformed into an Integrated Development Environment (IDE) for Java programming, often known as a Java IDE. This essentially converts programs created in Alice's coding blocks to text-based programming languages such as JavaScript or Python. This implies that children can go from visual programming to regular programming while working on the same script or project. The only thing to keep in mind with this feature is that it may drive younger audiences to try genuine, text-based programming too quickly or too soon (despite the 10+ suggestion). But for youngsters who have a genuine interest in coding and don't mind the hurdles that come with it, this shouldn't be too difficult.

Despite being one of the lesser-known – and younger! – coding languages, Go (pronounced "Gow") is turning out to be one of the best additions to the very big selection. This open-source programming language, developed and released in 2009, is defined as "statically typed" and "compiled," putting it in the same category as earlier, more prevalent scripts like C++ and Haskell. Nonetheless, despite its youth, Go has begun to create ripples in the community. In reality, Go has already extended across a wide range of sectors. A rising number of Fortune 500 organizations and enterprises are using Go for their projects.

Go is a statically typed and formulated programming medium with syntax comparable to the widely known, C. It has junk collection, type safety, dynamic typing, and several sophisticated built-in types including variable length of arrays and key-value maps. It also has a large standard library. Go is expressive, succinct, tidy, and efficient. Its concurrency capabilities make it simple to develop programs that make use of multicore as well as networked devices, and its innovative type system allows for flexible and modular program design. Go compiles swiftly to machine code while also providing the benefits of garbage collection and the endless possibilities of run-time reflection.

Go is very close to C in terms of structure. C, like Go, is a compiled language that employs many of the same methods, layouts, and grammar systems. The most significant distinctions are in structural type, CSP-style parallelism, memory security, and garbage collection. This effectively implies that someone who is used to writing in C will still have to learn Go from the ground up, but the transition will surely be smooth. In terms of syntactic simplicity, Go is sometimes compared to Python. Python, in our humble view, is far simpler than Go. But there's no harm in studying both, because GO may have advantages that make it better suited to a programming challenge than Python.

These languages mentioned above are interactive and engaging in design which makes any one of them a very good starting point for young minds who want to start coding from a young age. The right platform will be responsible for the long-term commitment to learning to code and end up being the reason that kids will go on to code and shape the future.

Download CuriousJr for more updates on Coding for Kids.