How to move from block Coding to Text Coding?

Why do you think schools take exams? Why we can't stay in one class forever? Why changes are becoming part of our life? So many questions and one answer Growth. It has a huge impact on the field of technology. We all want better, and this is possible when we grow with time. Why we? because we are the future of our country. As a beginner in coding, we all enjoyed block-based coding which was easy and fun. But with time we have to grow and move to text-based coding which is the actual coding world. It could be a bit boring for some students at the start but we will help you to make it fun like block-based coding.

What is text-based programming?

In a text-based programming language, coding is done by typing various characters following a certain syntax(rules and regulations) of a particular language. Some text-based languages include java, javascript, python, Lua.

Difference between Programming and Coding?

We use programming and coding interchangeably but this is the time we should know the terms we are using in almost every paragraph. Coding is writing codes for the specific application or programs whereas programming is giving instructions to computers. Coding is one aspect of programming.

How you can start?

As a parent, teacher, and educator we always try to find innovative ideas to introduce any new concept to kids. With Coding, we have one advantage that kids are already aware of block-based coding which has done the basic part that is the Introduction to the topic. But what next? How to move them to not so exciting(for some kids) and fun type of coding? Will it be a tough task for them? Will coding be a nightmare? Many questions arise in our minds but think about it as growth as I have mentioned above. Block coding doesn't give a full introduction to coding they are like Ready to eat food, just a few instructions we have to read and we are good to go. Many concepts like commenting, code styling, arguments, and many more.

You have already started your journey in coding, It's time to upgrade. Here are a few ideas that could help you:

When can you start?

We often think when should we start teaching our kids text-based coding? At what age? My answer to all these questions is, In programming, We have not mentioned any particular age at which we should start coding. Syntax of a programming language is like the grammar of any language( like English, Hindi). The earlier kids are exposed to a language, the easier it is for them to pick up.

Think it like this, you have gifted your kid a new remote control car. Do they start using it perfectly in the first trial? Do they face problems in adjusting with a new toy? As they have never used it, In the starting they faced problems but with time they will become master in that Just remember they should not get frustrated with trying.

What are the programming languages we can start with?

Text-based coding is nothing but different programming languages. So our main focus is on choosing a language that will be best for our growth. How to choose that? Do we need to evaluate every language? There are different ways we can choose:

Firstly, Know your options. As a beginner in text-based coding, I will suggest you the following languages:- 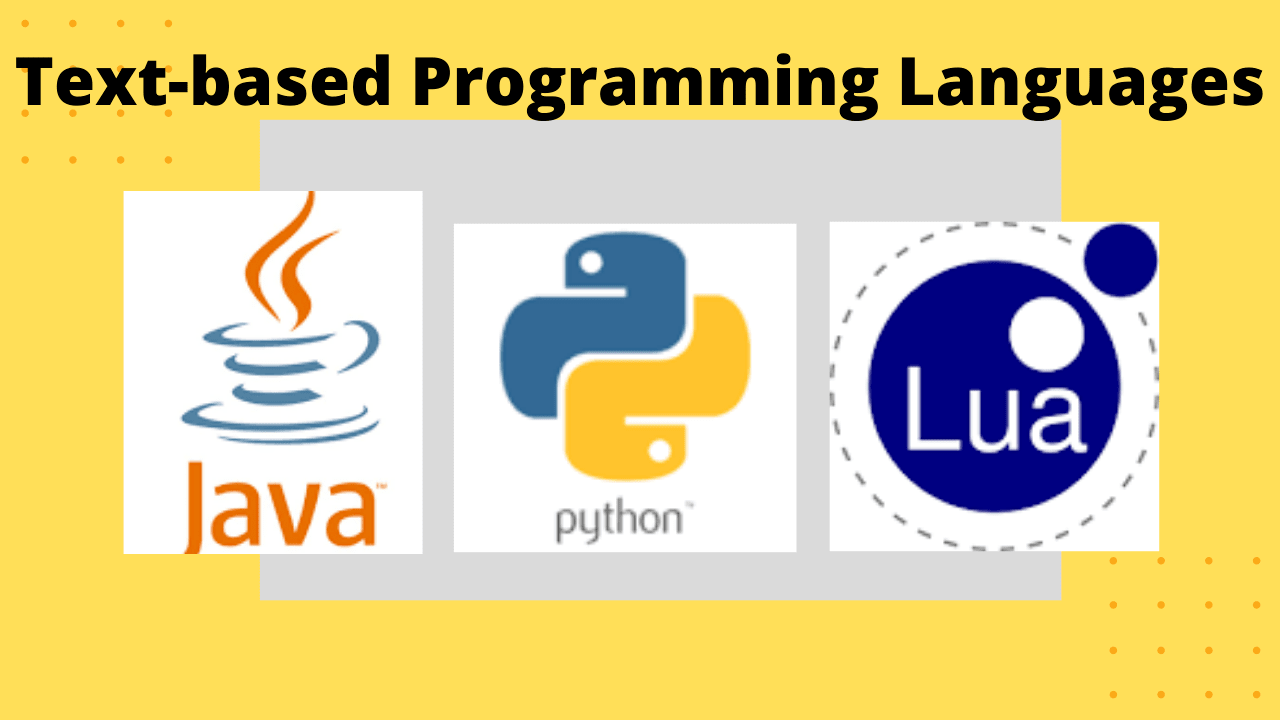 Python - It is a high level interpreted, object-oriented programming language.

Why? - It has a very simple syntax similar to the English language. Thus for the beginning, it could be an ideal choice.

Java - Java is object-oriented, easy to handle programming language. It is one of the most popular and well-liked coding languages in the world and is used worldwide for mobile games, apps, and web-based applications.

Why? - It could be an eye-catching language for kids. We can give an example of different applications like twitter, Spotify that we use in our daily life could excite them for learning java language.

Lua - It is a fast programming language that is easy to learn and use and to embed into your application.

Why? - It could be perfect for introducing children to text-based coding. It is usually used for IOS and Android game and app development as well.

What are the problems you can face?

Let us understand the problems kids can face while starting coding and analyze each of them: 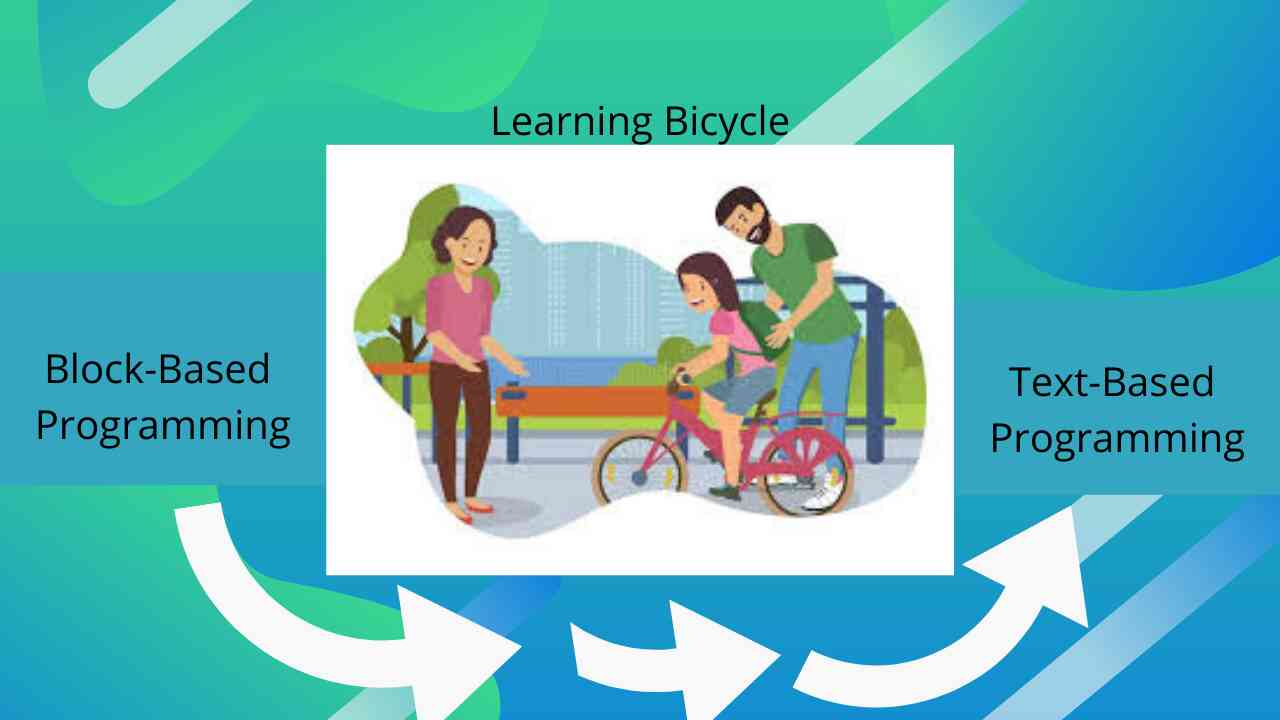 Apart from the above points, kids can find and face different problems when they start. I have discussed some common problems, let them be aware of the problems they will face. Give them the confidence by telling them the story of their childhood when they started learning a bicycle(skating, cricket, or any new sport they love to play now). How they failed in the first attempt but then passed with flying colors. This will boost them up.

How effective are block-based programming for transitioning to text-based languages?

Block-based programming is effective at lowering the barriers to programming and make it easy and motivating for children to start programming. But this ease has several advantages and disadvantages while transitioning to text-based languages.

Advantage - The several concepts that could be complex to understand through text-based programming could be easily understood by kids using this approach.

Disadvantage - As such it doesn't have any disadvantage but the ease of programming is the best and worst part of block-based coding as when kids shift to real coding they may lose confidence in starting as text coding is harder than it and the whole User Interface changes for kids.

But on a big scale, we consider kids starting programming using block coding to understand text coding concepts better and faster. It's been noticed that most of the kids who directly start text coding gets frustrated and leaves coding in the beginning only.

We have understood that as an index page of the book which is considered a roadmap to the book, visual programming is a roadmap to text coding which helps kids to chose the right path. We have discussed how we can start? just remember every child is different so, chose wisely. We have stated some programming languages that are easy to start with for kids and stated why they should learn them. Kids can understand better with example giving the introduction by telling real-life examples of the programming languages can help kids to understand the use of different languages in a better way. Problems we face while this transition is syntax errors, code layout, understanding new UI(user interface) which act as some barriers but with practice everything becomes easy.