What are Computers and What are their Types? 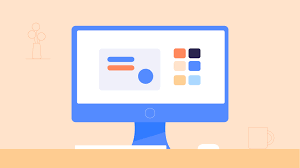 In this article we will be covering the following topics:-

A computer is a machine that can be programmed to perform arithmetic or logical operations in a structured manner. Programs are general collections of operations that modern computers can do. These applications allow computers to carry out a variety of activities. A computer system is a "full" computer that comprises the necessary hardware, operating system (main software), and peripheral devices for "full" functioning. This phrase can also refer to a connected and interacting set of computers, such as a computer network or a computer cluster. Computers are used as control systems in a variety of industrial and consumer goods. Simple special-purpose devices such as microwave ovens and remote controls, as well as factory equipment such as industrial robots and computer-aided design, as well as general-purpose devices such as personal computers and mobile devices such as smartphones, are covered. The Internet, which connects billions of computers and people, is powered by computers. Computers were originally designed to be used primarily for calculations. Since ancient times, simple manual gadgets such as the abacus have benefited humans in completing calculations. Some mechanical devices were created early in the Industrial Revolution to automate long, repetitive processes, such as guiding patterns for weavers. In the early twentieth century, more complex electrical equipment performed specialized analog calculations. During World War II, the first digital electronic calculating computers were constructed. In the late 1940s, the first semiconductor transistors were developed, followed by silicon-based MOSFET (MOS transistor) and monolithic integrated circuit (IC) chip technologies in the late 1950s, paving the way for the microprocessor and microcomputer revolutions in the 1970s. Since then, computer speed, power, and adaptability have grown massively, with transistor counts growing at a rapid rate (as anticipated by Moore's law), resulting in the Digital Revolution in the late twentieth and early twenty-first centuries. A present computer generally has at least one piece of technology, such as a central processing unit (CPU) in the form of a microprocessor, as well as some sort of computer memory, such as semiconductor memory chips. A sequencing and control unit can vary the sequence of operations in response to stored information, while the processing element performs arithmetic and logical operations. Input devices (keyboards, mouse, joysticks, and so on), output devices (monitor displays, printers, and so on), and input/output devices that perform both jobs are all examples of peripheral devices (e.g., the 2000s-era touchscreen). Peripheral devices allow information to be accessed from an external source, as well as saving and retrieving the results of activities.

Also, Computers can be classified based on their processing power and speed. The classification regarding this is:-

Now, let us understand each of them in detail.

As the name suggests Analog Computers are specifically designed for processing analog data. Analog data basically means data that continuously varies and doesn’t have distinct values. Any device in which continuously changing physical values, such as electrical potential, fluid pressure, or mechanical motion, are represented in a fashion that is comparable to the corresponding quantities in the problem to be solved is called an analog computer. The analog system is built up based on beginning conditions and then let to modify at will. The variables in the analog model are measured to get answers to the problem. The first analog computers were special-purpose devices, such as William Thomson's tide predictor, which he invented in 1873. (later known as Lord Kelvin). A.A. Michelson and S.W. Stratton created an 80-component harmonic analyzer in 1898 along the same lines. Each of them could provide a sinusoidal motion that could be multiplied by constant factors by adjusting the fulcrum on the levers. To create a resultant, the components were added using springs. The discovery of the differential analyzer by Vannevar Bush, an American electrical engineer, and his colleagues in the early 1930s was another watershed moment in the development of the contemporary analog computer. This machine, which employed mechanical integrators (variable-speed gears) to solve differential equations, was the first of its kind to be practical and dependable. In the mid-twentieth century, electronic analog computers worked by controlling potential differences (voltages). An operational amplifier, a device whose output current is proportionate to its input potential difference, was its most basic component. Further potential differences were acquired by enabling this output current to flow through appropriate components, allowing a broad range of mathematical operations, such as inversion, summation, differentiation, and integration, to be performed on them. A basic electrical analog computer was made up of a variety of amplifiers that could be combined to form a mathematical expression, which might be rather complicated and include a lot of variables.

It is one of the most basic forms of mechanical analog computers. It was created to carry out simple mathematical computations. It consists of two rods. The hashed rod is moved to match up with the marks on another rod to conduct the calculation.

Al-Jarazi was the one who came up with the idea. It had the capability of storing programming instructions. It stood around 11 feet tall and had a display showing the time, the zodiac, and the solar and lunar orbits. This technology might potentially allow users to adjust the length of the day according to the season.

Electrical impulses pass via capacitors and resistors in this sort of analog computer to replicate physical occurrences. There is no mechanical contact between the components here.

Any class of machines capable of solving problems by processing data in discrete form is referred to as a digital computer. It works with data encoded in binary code—that is, using only the two numbers 0 and 1—including magnitudes, characters, and symbols. A digital computer can control industrial processes and regulate machine operations by counting, comparing, and manipulating these digits or their combinations according to a set of instructions stored in its memory; analyse and organise vast amounts of business data; and simulate the behaviour of dynamic systems (e.g., global weather patterns and chemical reactions) in scientific research.
Input-output equipment, main memory, control unit, and arithmetic-logic unit are the four essential functional parts of a conventional digital computer system. To enter data and programme instructions into a computer and to view the results of the processing activity, a variety of devices are utilised. Keyboards and optical scanners are common input devices, while printers and displays are common output devices. The data that a computer receives from its input unit is stored in the main memory or, if not needed right away, in an auxiliary storage device. The control unit chooses and calls up instructions from memory in the correct order, then passes the directives to the relevant unit. It also synchronizes the input and output devices' various operating speeds with that of the arithmetic-logic unit (ALU) to guarantee correct data flow throughout the computer system. The arithmetic and logic techniques used to handle the incoming data at extremely fast speeds—in many cases in nanoseconds—are performed by the ALU (billionths of a second). The central processing unit (CPU) of most digital computer systems is made up of the main memory, control unit, and ALU, while peripheral equipment includes input-output devices and auxiliary storage units.

Hybrid computers combine the advantages of both analog and digital computers. The analog component frequently acts as a solver of differential equations and other mathematically complicated problems, while the digital component usually serves as the controller and performs logical and numerical operations. Packard Bell released the Hycomp 250, the first desktop hybrid computer system, in 1961. The HYDAC 2400, an integrated hybrid computer released by EAI in 1963, was another early example. Marconi Space and Defense Systems Limited (under Peggy Hodges) developed the "Starglow Hybrid Computer" in the 1980s, which was made up of three EAI 8812 analog computers linked to an EAI 8100 digital computer, which was also coupled to a SEL 3200 digital computer. Hybrids became obsolete in the late twentieth century as digital computers, notably digital signal processors, became more powerful. Analog computers are extremely fast in general because they can solve most mathematically complicated problems at the rate that a signal crosses the circuit, which is usually a significant fraction of the speed of light. Analog computers, on the other hand, have poor precision; they are restricted to three or four digits of precision at best. Using an analog computer front-end, hybrid computers may get a very excellent but rather imprecise 'seed' value, which is then fed into a digital computer iterative process to acquire the ultimate necessary degree of precision. Because many fewer repetitions are necessary using a three or four digit, very precise numerical seed, the overall digital computation time to obtain the appropriate accuracy is considerably decreased. Minimizing digital-computer noise in analog computing parts and grounding systems is one of the most difficult technological challenges in hybrid computers.

Supercomputers are the most powerful and fastest computers available. They're built to handle massive amounts of data. In a single second, a supercomputer can process billions of instructions. It contains tens of thousands of processors that are all linked together. Weather forecasting, scientific simulations, and nuclear energy research are all examples of scientific and technical applications where supercomputers are employed. Roger Cray invented the first supercomputer in 1976.

A workstation is a single-user computer designed for technical or scientific purposes. It features a faster CPU, plenty of RAM, and high-speed graphics cards. It usually specialises in a single task and comes in a variety of shapes and sizes, including graphics workstations, music workstations, and engineering design workstations.

It's a multiprocessing computer of medium size. It is made up of two or more CPUs and may accommodate anywhere from four to 200 users at once. In institutions and departments, miniframe computers are utilised for billing, accounting, and inventory management. A minicomputer is a hybrid of a mainframe and a microcomputer, being smaller than the mainframe but bigger than the microcomputer.