What are functions to kids?

How do kids learn new things? Or What is the effective way to teach a kid? I am sure as parents you can tell many ideas but, Isn't it teaching step by step is one of the best ways? But what if we are working with computers or we are teaching them? Do we need to repeat the same steps every time? No, Not in programming. We are here to make everything convenient for us. In programming, we often use the same code more than once to repeat actions or add onto in order to execute more complex tasks. Functions allow us to teach the computer how to do something one time and easily reuse the code later.

Let us understand the concept of functions with an example:

Today due to a pandemic we have understood the importance of sanitization. In a hospital, every person who wants to enter has to follow the set of instructions.

Every time when a person enters the guard has to repeat the instructions to them. Which was a hectic job isn't it? Is there any way we can help them? Yes, we can. Can you notice the guard has to repeat a set of instructions? let's put all the instructions in a function and give them a meaningful name. Now every time a new patient visits the hospital, the guard could show them the board and tell them to follow the Entrance_Instructions function. Thus minimizing all the hard work of repeating each step again and again. 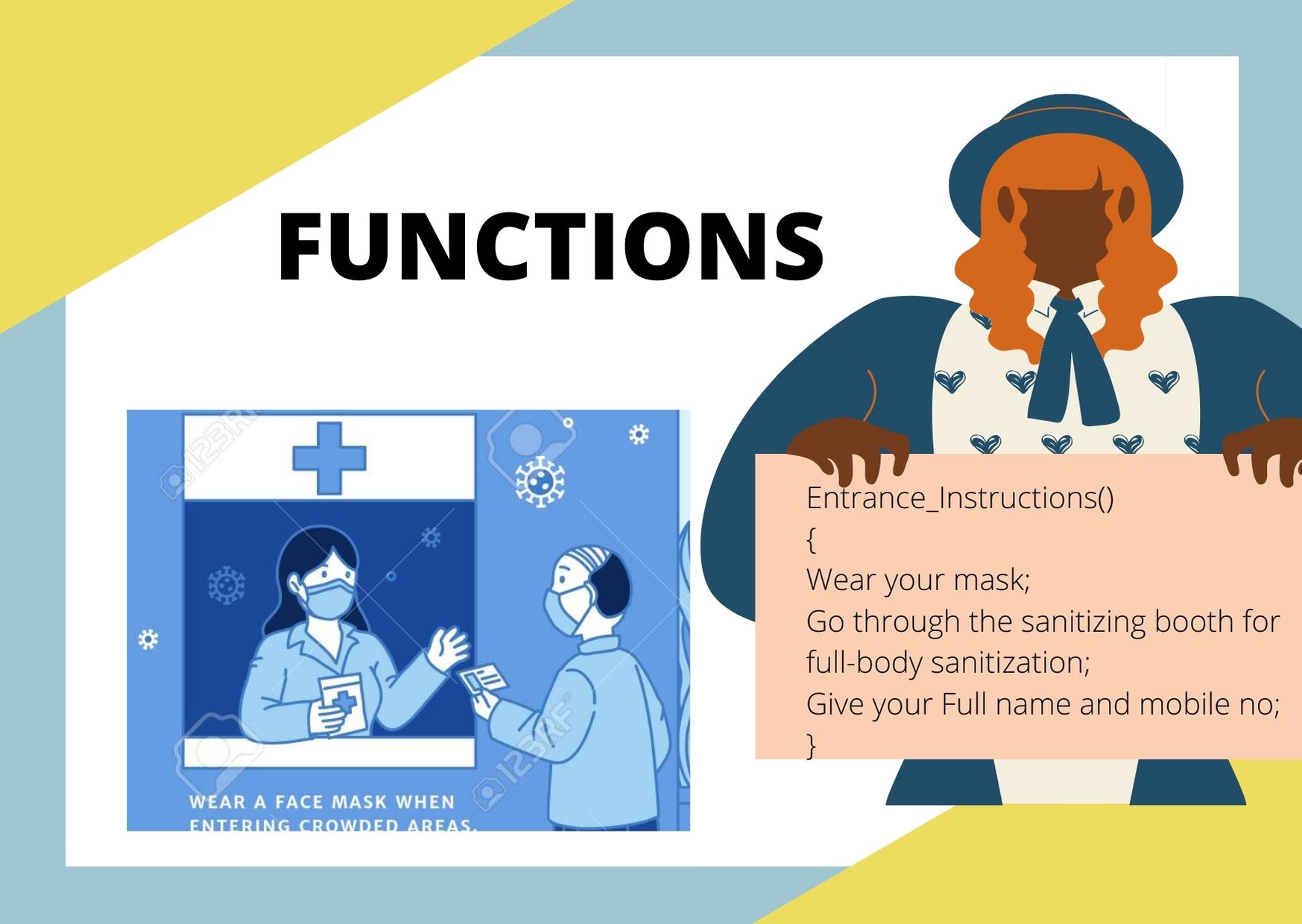 What is a function?

A function is a block of organized, reusable code that is used to perform some particular tasks. In the function, we combine some simple tasks to help us in more complex tasks. In sports, you can think about dribbling a soccer ball - putting together running and kicking, and naming it as one new action: Dribbling.

Let us understand this one more example taken from our CuriousJr App for function practice problem:- 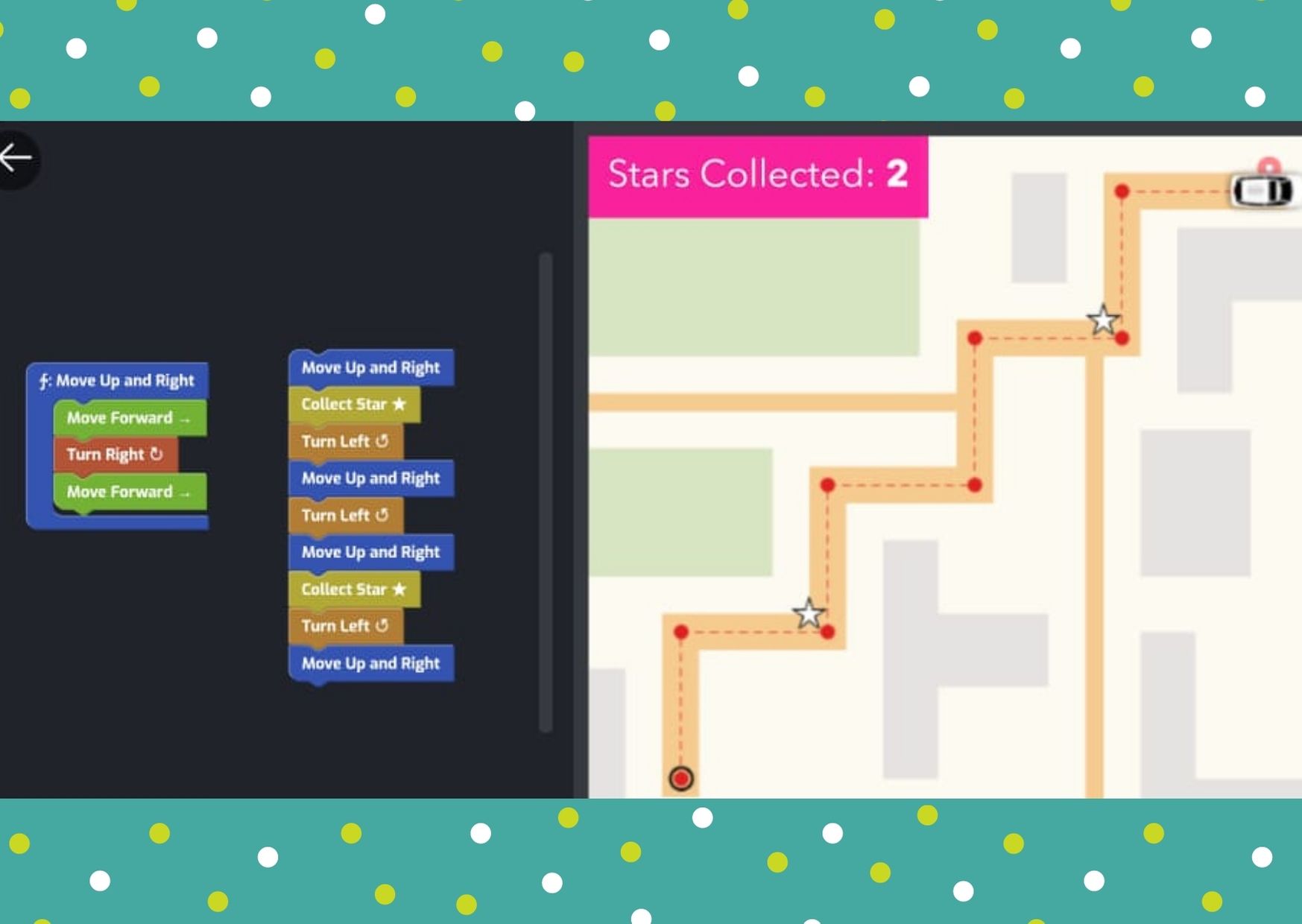 Now Check your steps and see if there is a repetition of a set of steps. If yes, you are going right. Now let's give a name to that set of instructions so that whenever we have to use it, we will call its name. 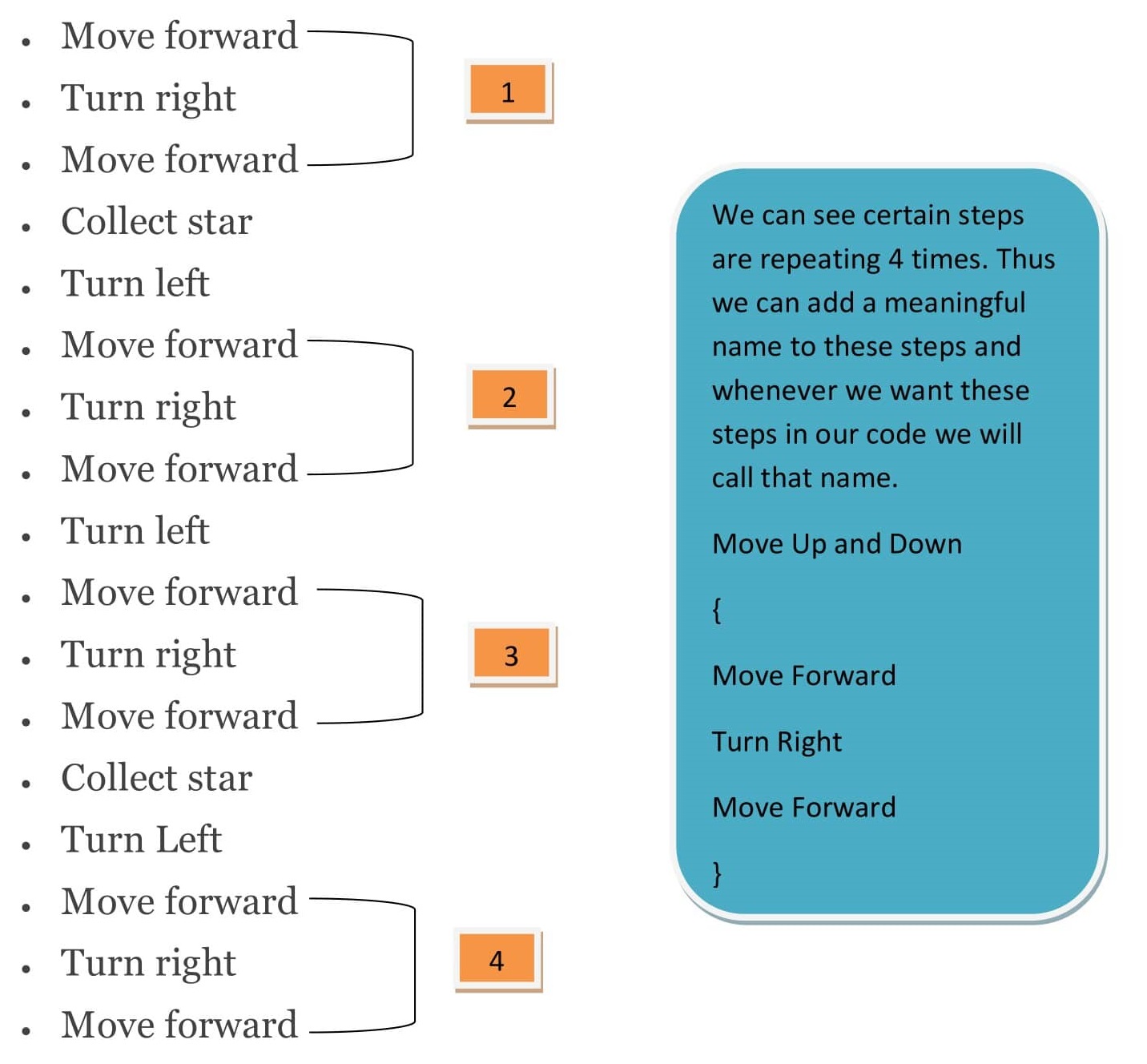 Our lines of code also become less when used functions: 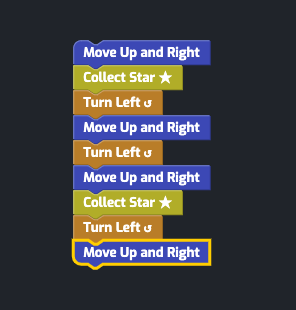 How to name a function?

According to a survey, an average coder spends 75% of the time for understanding the code, 20% of the time modifying the existing code, and only 5% for writing new code. Almost every programming language has a pre-specified naming convention(rules and regulations) and it is important to follow it for making it easy and meaningful to read our code. The names should be clear and it should define what the function does or its functionality specifically.

For better understanding, try to give these instructions a name that should be understood by any new programmer that is reading your code. I am sure you could come up with perfect names and as a reference, I will give them the name pack bag() and learn skate() respectively.

Are Loops and Functions Same?

A function is a piece of code you can run over and over again simply by calling it. Whereas a loop is a piece of code that runs over and over again until the condition is false. No, they are not the same they have some similar functionality. They both keep our code DRY(Don't Repeat Yourself) but has a different use. We can understand this with an example: Suppose you are watching TV(Television) till Electricity is there so using a loop we will say: 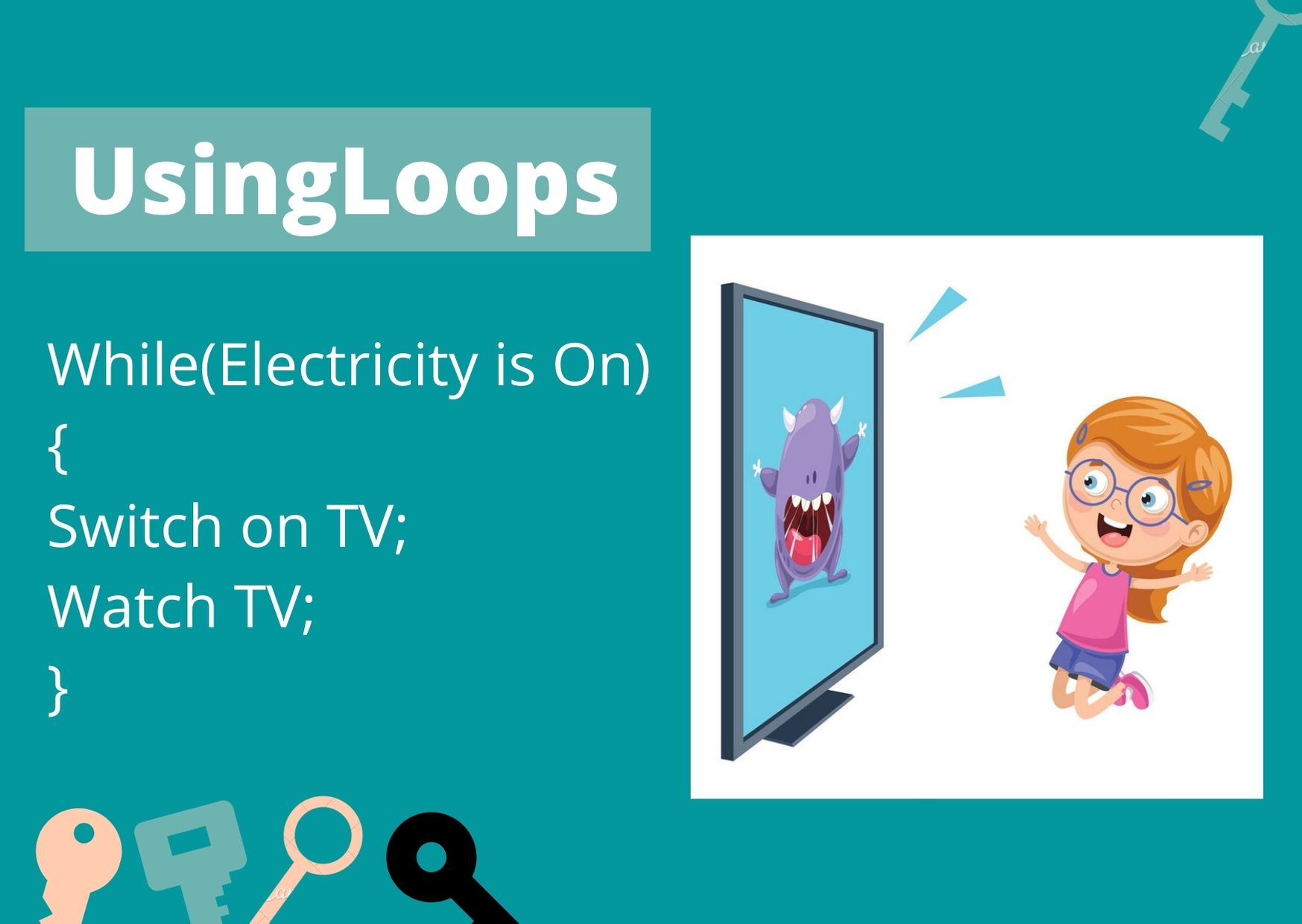 But just imagine Electricity is gone you come out of the loop or you stop watching TV but after one hour light comes again and you want to watch TV again then what you have to use that loop again? But remember our task as a programmer is to reduce the lines of code and making it more convenient. So if we put both instructions in a function and give it a meaningful name then we can call it any no. of times we needed. 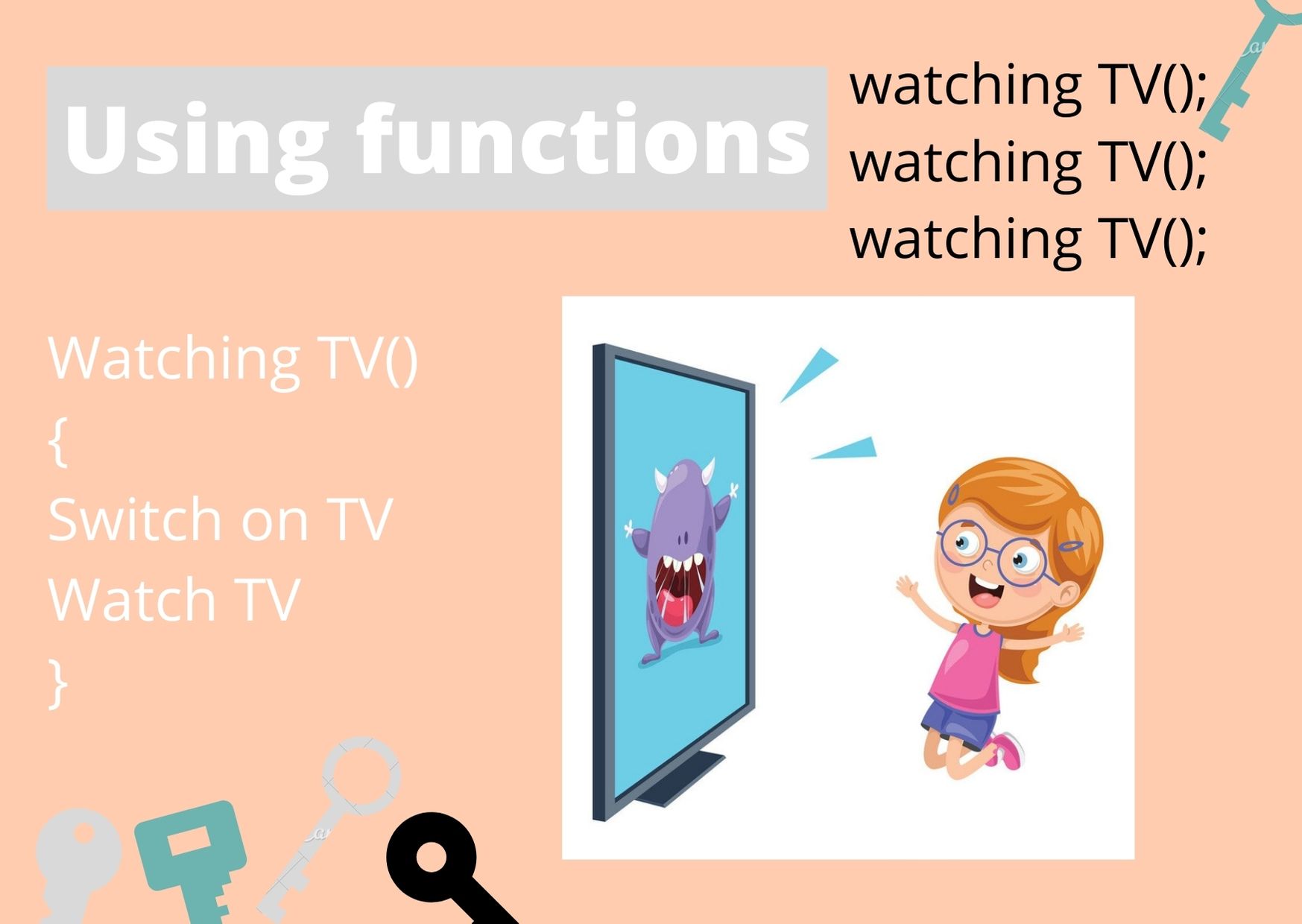 What is ()? Why we are using it with functions?

These are called parentheses (opening and closing). In most programming languages, we use parentheses to represent the function. It acts as the identity of functions just like: Every Student in a class has a unique Identity No. or we can Roll No.

How to create a function?

In different programming languages, we have different syntax for creating a function. But for introducing the concept amongst the kids let's consider general steps that are common in almost every language.

What are functions with Input?

In most of the programming languages, Functions allow the passing of some parameters(understand it as an input) within the parentheses which we have discussed above. But What is the use of function with parameter? Don't get confused with the term argument or parameter or input. These are just synonyms our main objective is to understand the concept.

Let us understand this with a real-life example: Let us make a function for driving a car. Try yourself: Give the function a name and write the instructions for it.

Now, what if you want that driver drives at a particular speed. How you will convey this message through functions to the driver? The answer is by providing a parameter of speed in the function.

See this function to understand: 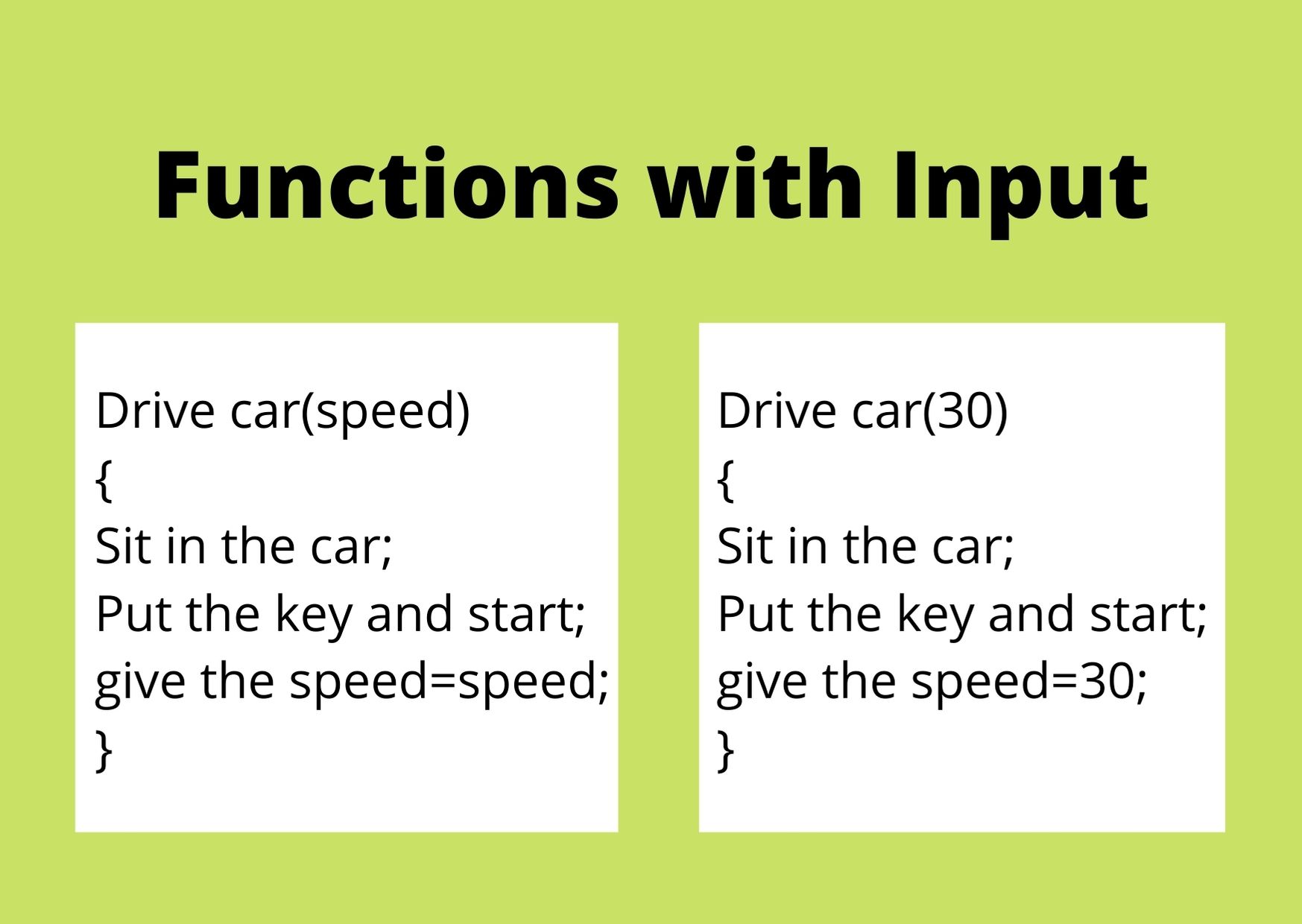 Now whatever speed we give as input in the function will be the speed we will be instructed to drive the car. As we can see in the image above in the right image we have shown how to pass input in function and in the left image we have passed a particular speed which included in our function. Can you understand the use of parameters in the functions now? Try to put parameters in other examples also.

Why functions are important?

When we have to repeat the same task in programming we have mainly two options:-

How the second option is better than the first tells us the importance of functions. We can also call them the feature of functions let us discuss them:

Above are some features of functions which show us the importance of function when you will use them you can find some more with your perspective.

We can conclude that Functions are small programs within a large program. We can reuse a piece of code by converting them into a function. Calling the function plays a key role in using the functionality of the function we declared. We can Call function in a program any no. of times. We can declare them with inputs also which helps us in providing a particular input to our function. They are useful for better readability, Fewer lines of code, Reusability, and easy debugging. We have given different examples for better understanding, try to find some yourself. let your brain have some exercise.