What are the types of Software and Cyberethics 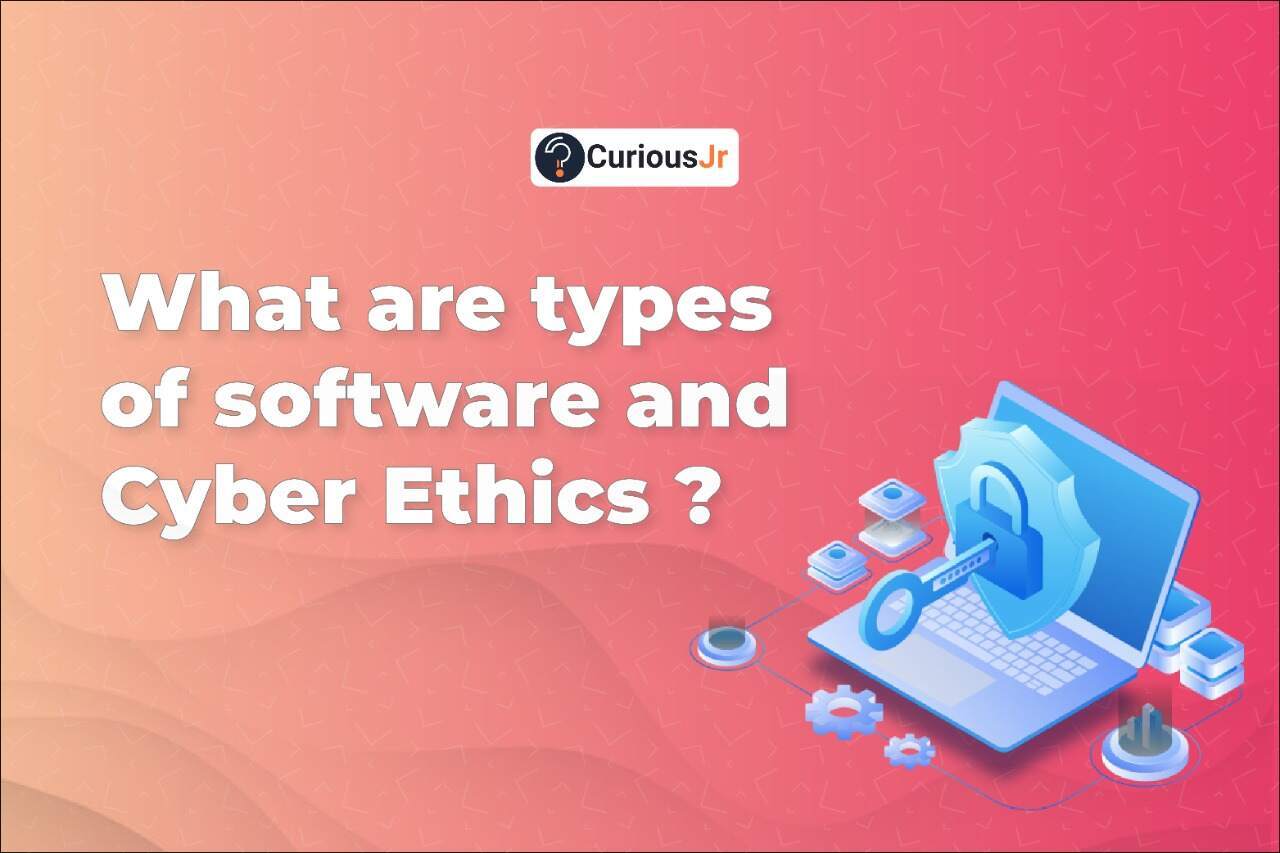 In this blog we will be discussing about the following:-

What is a Software?

Software is a collection of data, programs, processes, routines, and instructions that guide a computer or electronic device on how to function, work, and perform specified activities. Hardware, on the other hand, refers to the actual system and components that carry out the task. Application software and system software are the two primary types of software. An application is a piece of software that satisfies a specific demand or performs a specific purpose. System software is created to operate the hardware of a computer and to offer a platform for programs to run on. Programming software, which offers the programming tools required by software developers; middleware, which sits between system software and applications; and driver software, which controls computer devices and peripherals, are examples of other forms of software.

How does the software work?

It's simply another name for a computer program, and a program is a collection of instructions that informs the gadget what to do.
Those instructions are written in a language that a computer can understand. Logic and the input, process and output concept are at the heart of all software. The software requires data to function, i.e. the input. Consider pressing a phone button. It then proceeds to ask a series of questions based on a set of guidelines. Should the button, for example, print an invoice or cancel an order?
What happens as a consequence is referred to as the output. The invoice jumps out of the tray when your printer starts up.

Types of Softwares and their examples

Application software is the most popular sort of software. It is a computer program package that performs a specific job for a user or, in some situations, another application. An application can be standalone or comprise a collection of programs that operate the application for the user. Office suites, graphical software, databases and database management programmes, web browsers, word processors, software development tools, image editors, and communication platforms are all examples of contemporary apps.Many programmes, known as application software, perform specialised duties for end users, such as creating reports and accessing websites. Applications can also help other applications by doing tasks for them. Applications on a computer cannot operate on their own; they require the operating system, as well as other system software packages, to function.
These desktop apps are installed on a user's computer and perform functions using the machine's memory. They take up space on the hard disc of the computer and do not require an internet connection to function. Desktop apps, on the other hand, must adhere to the hardware requirements of the devices on which they operate.Web apps, on the other hand, simply require internet connectivity to function; they are not dependent on hardware or operating system software to function. As a result, web apps may be launched from any device that has a web browser. Users can run the app from Windows, Mac, Linux, or any other OS because the components responsible for the application's functioning reside on the server.

Driver software, also known as device drivers, is frequently regarded as a form of system software. Device drivers are programmes that control the devices and peripherals that are linked to a computer and allow them to fulfil their functions. To work, every device attached to a computer requires at least one device driver. Software that comes with nonstandard hardware, such as specific gaming controllers, and software that enables standard gear, such as USB storage devices, keyboards, headphones, and printers, are examples.

Middleware is a word that refers to software that acts as a bridge between application and system software, or between two types of application software. Middleware, for example, allows Microsoft Windows to communicate with Excel and Word. It may also be used to transmit a remote work request from one program on one computer to another application on another machine with a different operating system. It also allows newer programs to communicate with older ones.

Cyberethics, often known as internet ethics, is a field of applied ethics that investigates ethical issues and moral challenges that have arisen as a result of the rise of digital technology and worldwide virtual worlds. Conflicts over privacy, property, security, accuracy, accessibility, censorship, filtering and other issues have arisen since the internet's inception.
Rather than using classic ethical theories such as utilitarianism, deontological ethics (obligation ethics), and virtue ethics directly, ethicists frequently seek solid ethical reasoning in the form of contextualized speech. While laws are largely determined by the legislative body of a nation-state, ethicists look for more universal bases for moral virtue and fairness. Many cyber ethicists, in particular, continue their debates in multicultural settings without succumbing to radical cultural relativism.

The development of cameras in the late eighteenth century sparked comparable ethical questions as the internet does now. Warren and Brandeis defined privacy from an ethical and moral standpoint in a major Harvard Law Review article in 1890 "essential to individuality, humanity, and dignity Privacy is also necessary for a sense of autonomy, which is defined as "a feeling that there is an area of an individual's life that is completely under his or her control, an area that is free from outside interference." Privacy invasion may even put a person's health in jeopardy." (1890) (Warren & Brandeis). The Internet and the spread of private data through governments and e-commerce, more than a century later, is a situation that necessitates a fresh round of ethical discussion over a person's privacy.
With "three elements of secrecy, anonymity, and isolation," privacy may be deconstructed as the restriction of others' access to an individual (Gavison, 1984). Anonymity refers to a person's right to be free of unwanted attention. The lack of physical proximity of an individual to others is referred to like solitude. The term "secrecy" refers to the safeguarding of personally identifiable information from being publicly shared. When people do purchases or subscribe to services, they give up their personal information. Customers' privacy is protected by ethical business practices, which include safeguarding the information that may result in the loss of secrecy, anonymity, and solitude. Information such as credit card numbers, social security numbers, phone numbers, mothers' maiden names, addresses, and phone numbers that are openly acquired and disseminated over the internet may result in a breach of privacy. Fraud and impersonation are two examples of harmful acts that arise as a result of the direct or indirect misuse of personal data. Due to the widespread availability of private information on the Internet, identity theft is on the rise. In 2002, for example, seven million Americans were victims of identity theft, making it the fastest-growing crime in the country (Latak, 2005). The biggest contributors to the increase of cybercrime are public records search engines and databases. Some ethical philosophers have made proposals to limit the spread of sensitive personnel information in internet databases, which are included below. Social security numbers, birth dates, hometowns, and mothers' maiden names should all be excluded from database information. Phone numbers that are usually not listed should be excluded.

Data warehouses are now often used to collect and store massive volumes of personal information and customer transactions. These facilities have the ability to store enormous amounts of customer data indefinitely. Databases, cookies, and spyware are some of the primary architectures that contribute to the degradation of privacy. Some may argue that data warehouses are meant to be self-contained and secure. However, business websites and social networking sites can provide enough personal information to conduct a reverse lookup. Is it not thus critical to address some of the ethical concerns about how protected data gets up in the public domain? As a result, identity theft protection companies are becoming more popular. Identity theft protection insurance has become a profitable business for companies like LifeLock and JPMorgan Chase.

Accessibility, Censorship and Filtering
Accessibility, censorship, and filtering raise a slew of ethical dilemmas, each with its own field of cyberethics. Many challenges have emerged, challenging our notion of privacy, security, and social involvement. Throughout history, systems have been built for the sake of protection and security. Today's applications take the shape of software that filters domains and material so that they can't be readily accessed or obtained without a lot of effort, or on a personal or commercial level using free or content-control software. Censorship and filtering on the internet are used to limit or prevent material from being published or accessed. Offline censorship and filtering raise legal difficulties comparable to online censorship and filtering. The same issues that apply to offline censorship and filtering apply to online censorship and filtering: whether individuals are better off with unrestricted access to information or should be safeguarded from what is deemed harmful, indecent, or illegal by a governing entity. Much of the issue arises from the fear of kids having access to the Internet, and several online advocacy groups have cropped up to promote awareness and limit minors' Internet use.
Censorship and filtering occur on small to large scales, whether it's a company restricting their employees' access to cyberspace by blocking certain websites deemed only relevant for personal use and thus damaging to productivity, or a government building large firewalls that censor and filter access to certain information available online frequently from outside their country to their citizens and anyone within their borders. The Golden Shield Project, often known as the Great Firewall of China, is a censorship and surveillance project put up and administered by the People's Republic of China. It is one of the most well-known examples of a government limiting access. Another example is the case of the League Against Racism and Antisemitism (LICRA), French Union of Jewish Students, vs. Yahoo! Inc. (USA) and Yahoo! France from 2000, in which the French Court declared that "access by French Internet users to the auction website containing Nazi objects constituted a contravention of French law and an offense to the country's 'collective memory,' and that the simple act of displaying such objects (e.g. exhibition of uniforms (2001, Akdeniz) [9] Many websites now have to follow the regulations of the countries in which they are accessible as a result of the French legal judgment.


Keep following CuriousJr for more updates on Coding for Kids.