What Is An Algorithm? 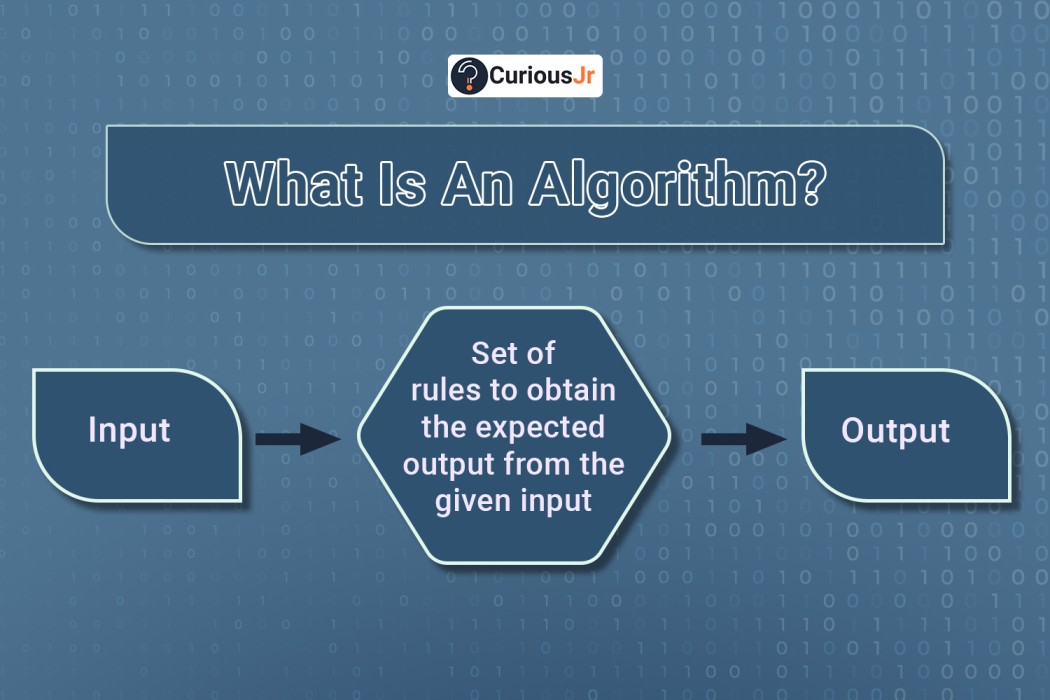 What will we discuss:-

An algorithm is a set of step-by-step instructions for solving a problem. Before we dive deep into what an algorithm is? Let's understand what the problem is. Imagine a scenario where you are craving a chocolate milkshake. Now, this craving for a milkshake is a problem. How do you make a milkshake? You follow a recipe, that is,

Step 1: Peel the banana and chop them into pieces. Put the chopped banana into the juicer.

Step 2: Add the milk into the juicer.

Step 4: Add sugar according to your taste and blend.

Step 5: The milkshake is ready to serve. You can sprinkle cardamom powder on top while serving.

Even if we're not conscious of it, we use algorithms all the time, from solving a Rubik's cube to driving a car. In computing, programmers write algorithms that are a specific set of instructions, which allows the computer to do everything, be it playing music or running a self-driving car. These instructions tell the computers what specific steps to execute, in what order the steps are to be executed, to carry out a specific task. Learning how to write an algorithm won't solely lay a strong foundation in programming skills but will also help you to develop logical thinking skills.

Why Should You Use An Algorithm?

The upside of using an algorithm to solve a problem or make a decision is that it gives us the best possible answer every time. This is useful in situations where accuracy is critical or where similar problems need to be frequently solved. In many cases, computer programs can be designed to speed up this process.

Such step-by-step approaches can be useful in situations where each decision must be made following the same process and where accuracy is critical. For example, when adding two numbers, we always expect the result to be the addition of the two numbers. It involves the same process, that is, adding one number to the other.

Why Are Algorithms Important To Understand?

Algorithmic thinking, the ability to define clear steps in a sequential order to solve a problem, is crucial in many different fields. Algorithmic thinking allows us to break down problems and conceptualize solutions for each individual step. Being able to understand and implement an algorithm requires us to practice structured thinking and reasoning abilities.

How Does The Algorithm Work?

The purpose of the Algorithms is to successfully replicate the human brain's decision-making processes without requiring us to take in all of the information and spend the time necessary to filter through it ourselves.

It's almost as if it's a way to speed up the human thinking process.

At it is the most basic level, the Algorithms are a set of if-then statements that execute very quickly in a computer to produce a result: You will receive a B if you do A. If you select C rather than D, you will receive D.

How To Generate An Algorithm?

Step 1: Determine The Goal Of The Algorithm

Before we even start, we need to determine the goal we wish to achieve. We need to ask ourselves, “What do we want to get done that requires an algorithm?” We should try to come up with an algorithm that will solve the problem for every case scenario.

For example: Here, I will make a milkshake, that is, my goal is to make a tasty milkshake.

For any algorithm to solve a problem, data is essential. Go through/Research what are the needs of the user and what problem this algorithm will solve. Look into the problem, research how many solutions are available. Collect the data you will be needing to solve the problem
For example: To make a milkshake, you will be using the ingredients to make the milkshake perfect and delicious. Here, the ingredients will be the available data. Let’s see the following cases-Case 1: Suppose I’m out of sugar, instead of sugar I could use honey or chocolate.
Case 2: Suppose I am out of milk. What else can be used instead of milk? Yes, that is correct, Milk Powder. Here what I need to do is get the milk powder and a cup of water. Add milk powder to water, stir it and the milk is ready. In this case, making milk requires an extra step.

After understanding the problem and getting sufficient data we need to start applying the logic on how the algorithm will work. Logic Implementation works in such a way that it solves the problem for every case scenario. No matter what the problem is, the goal will always be the same. It may require a few extra steps.
For example: To make a banana milkshake I will be needing bananas, milk, sugar, and a grinder/ juicer. For implementing the logic, let us consider this,
Suppose you own a milkshake show now you see two customers at your shop now customer A orders a banana shake whereas customer B orders a chocolate banana shake. Now our goal is to serve bananas to both the customers but of different types.
The logic for thick banana shake will be,
Step 1: Get all the ingredients.
Step 2: Put 3 bananas in the juicer and milk with some sugar for sweetness and blend.
Step 3: Serve the banana milkshake to customer A.
Step 4: Add some chocolates into the juicer and blend.
Step 5: Server the chocolate banana milkshake to customer B.

Our algorithm will have common inputs or settings which is going to be the same for all the users and we will require specific inputs per step. These step-specific inputs will be the same for all our users, but we want more flexibility. It’s important to consider this when building your algorithm. For example: If a customer orders for sugarless banana shake then while making the milkshake I will have to skip a step of adding the sugar. Similarly, if there is any need for adding some ingredients I will do it accordingly.

Characteristics Of An Algorithm:

An algorithm should have the following characteristics-

Where Are Algorithms Used In Computer Science?

Algorithms are used in every part of computer science. They are the pillar of the programming field. Computer algorithms play a big role in how social media works: the algorithm decides which posts show up, which ads are seen, and so on. Algorithms make all of these judgments. Algorithms are used by Google programmers to optimize searches, predict what users will enter, display results according to user interest, and more. Knowing how to develop an algorithm is an important component of computer programming when it comes to problem-solving.

Writing an algorithm has many advantages lets take a look at some of them,